The London Water Research Group hosted a session at the World Water Congress in Edinburgh, held 25-29 May 2015, entitled ‘Levelling players and context: Re-examining policy for transboundary water allocation and governance’.

Other LWRG Members participated, led, and attended a variety of other sessions. Below, Stephanie Hawkins reflects on The Challenges for Transboundary Aquifer Law and Governance.

Water law on both the national and international levels featured as a prominent theme in the XV World Water Congress in Edinburgh this year (25-29 May 2015), with 20 parallel and special sessions combined dedicated to the legal sub-theme. The week also gave significant attention to transboundary groundwater (water stored underground shared between two or more states) and aquifers (geological formations that have the capability of storing water). An entire parallel session focused on ‘Law and governance for managing groundwater resources’, and a special session looked at ‘The (transboundary) groundwater resources of Africa’. The trend for discussing the challenges and implications of governance over transboundary aquifers is repositioning the subject within international water law from the ‘too difficult’ box, into a popular research question.[1]

The focus on transboundary aquifers could not be more timely, with the General Assembly due to decide the fate of the UN International Law Commissions’ Draft Articles on the Law of Transboundary Aquifers[2] in 2016,[3] following repeated postponing.[4] The Draft Articles represent arguably the most authoritative international legal instrument that specifically addresses the governance of aquifers,[5] although they merely constitute recommendations for best practice rather than ratified legally binding obligations, and the value of their current content has been seriously challenged.[6] Legally binding treaty arrangements between states over aquifers are almost negligible.[7] This is surprising when considering the amount of transboundary aquifers that exist in relation to surface water bodies.[8]

After years of neglecting transboundary aquifer governance as a subject, it is finally starting to become a topic that can no longer be ignored. It is estimated that 96% of all freshwater is stored underground,[9] and as climate change becomes a growing concern affecting the availability of surface water, groundwater and aquifers are increasingly considered an important part of climate change adaptation.[10] It is also becoming imperative to ensure that there is adequate regulation over transboundary aquifers, as their integrity and surrounding ecosystems are threatened by over exploitation,[11] land-use changes[12] and pollution.[13] So what were the conclusions from the World Water Congress regarding transboundary groundwater and aquifer governance, and what should the next steps be?

The most prominent challenge for transboundary aquifer governance that stood out was a severe knowledge deficit regarding what is known about these diverse hydrogeological systems. This is not to say that there haven’t been rapid advances in knowledge in the last decade. The International Groundwater Resources Assessment Centre (IGRAC) has been mapping the Transboundary Aquifers of the World in its Global Groundwater Assessment since 2009 where it identified 380 transboundary aquifers. This number has since grown, from 455 in 2012 to now 592 in 2015. Presentations at the World Water Congress revealed further studies fleshing out these assessments. Andrew Ross from UNESCO-IHP outlined case study from the Groundwater Resources Governance in Transboundary Aquifers (GGRETA) project,[14] which aims to conduct in-depth assessments of the physical and socioeconomics characteristics of three selected case studies. Geert-Jan Nijsten from IGRAC gave a presentation on the groundwater component of the GEF funded Transboundary Waters Assessment Programme – TWAP, which is currently collecting data on 199 transboundary aquifers in order to characterize their hydrogeological, socio-economical, environmental and governance dimensions.[15] He noted how the project allows identification of important hotspots, providing focus for future work. These projects and the information collected are significant, as activities and context surrounding an aquifer affects the importance of that aquifer, and accordingly, the nature of state cooperation for its governance.

These projects represent significant progress since many states are unaware they even share an aquifer, let alone have considered cooperation with their neighbours. As one state’s use of an aquifer can have negative implications for the use by another state, being aware of underlying aquifers is important for future use and future generations, even if the resource is not currently being utilized. Despite these research advancements, a knowledge deficit still exists, and this data collection is by no means complete. Over the last four assessments by IGRAC, visible changes of the aquifer boundaries can be observed (Figure 1). 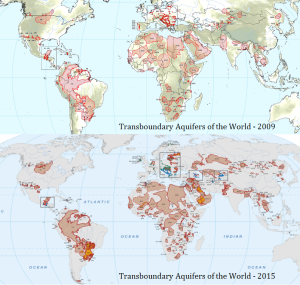 The changes in mapping over time are explained by the data collection methods used for the IGRAC project: asking states for information on their aquifers via surveys. Fundamental differences in methodologies and technologies in data gathering produces a body of inconsistent information. This problem was visibly illustrated in a presentation by Rosario Sanchez, which summarized a study identifying transboundary aquifers along the Mexico-US border.[16] Notably, the difference in information provided by states created doubt over aquifer boundaries, as well as the amount of aquifers shared by the two states. This was primarily due to differences in data collection and methodologies between the two countries, and a lack of accepted definition of the transboundary nature of an aquifer. Conclusions in the World Water Congress sessions stressed that the obvious next step is to reduce the knowledge deficit, and understand what exactly is being governed before rules can be put in place to govern them.

Relying on states to provide information regarding their resources highlights another major challenge regarding scientific uncertainty: politics. Many sessions during the World Water Congress addressed the relationship between science and law, and the dynamics of power and politics that underlie both disciplines. In one such session, Stephen McCaffrey from the University of the Pacific addressed the influence of science on international water law development and implementation, noting that the implementation committee for the UNECE Water Convention[17] mainly consists of scientists, with only a few lawyers. This is good news for ensuring that the function and characteristics of the resource being governed by the legal rules is understood. However, this situation cannot be separated from the political nature of contested scientific expertise, and the politics and power inherent in knowledge construction. Naho Mirumachi from King’s College London pointed out that knowledge does not just consist of scientific data, but also traditional and local knowledge, and that information used for governance is a political decision, which puts value on different types of knowledge. Such considerations highlight that ‘reducing the knowledge deficit’ represents yet a further challenge, rather than a next step towards governance solutions.

In a world where there is contested expertise, where the accepted knowledge is likely the result of power and politics, and where data is both limited and constantly changing, is it preferable to make data collection a priority before legal rules can be put in place?

Legal rules for uncertainty exist. The UN ILC’s Draft Articles require a precautionary approach in the prevention, reduction and control of pollution, ‘in view of uncertainty about the nature and extent of a transboundary aquifer or aquifer system and of its vulnerability to pollution.’[18] The obligation to notify, consult, and conduct a transboundary Environmental Impact Assessment is triggered merely when a planned activity ‘may’ have a transboundary affect,[19] whilst exchange of data and information requirements aim to close the uncertainty gap.[20] Despite this, there needs to be further study to identify the best governance frameworks and legal rules for the uniquely uncertain case of transboundary aquifers, for which, in many cases the boundaries of what is governed are not defined, and where there may never be true scientific certainty. It is true that groundwater governance is complex and needs to be tailored to local conditions, and knowing the location and characteristics of an aquifer is an obvious prerequisite for governance. But in terms of the applicability of legal rules in these circumstances, is the vague and inclusive precautionary principle enough to guide practical implementation? Do the requirements for information exchange appreciate the power dynamics in knowledge construction? Whilst interdisciplinary collaborations continue to be integral to this topic, these are the imminent questions for lawyers, while the much needed scientific data collection continues.

The application of law over a subject matter with undefined boundaries is certainly challenging, but the focus needs to be on how the law can achieve effective governance, without relying on data collection and the acquisition of scientific knowledge that may take years, and which may always be changing, uncertain and contested. The message from the World Water Congress is important in highlighting just how little we know, and the challenge ahead in collecting the needed information. However, lawyers should not be hindered by this knowledge deficit in assessing the future for transboundary aquifer governance. Instead, the focus should embrace the challenge of how to regulate the unknown, as waiting for scientific certainty may cause a damaging delay when it comes to the integrity of the resource, as well as the ecosystems and communities that rely on them.

Stephanie Hawkins is a PhD researcher at the Strathclyde Centre for Environmental Law and Governance, University of Strathclyde, UK. Her research examines the international legal framework over transboundary aquifers using an environmental justice lens. She holds an MSc in Water Security and International Development and an LLB in Law with American Law from the University of East Anglia.

[4] G.E. Eckstein and F. Sindico, ‘The Law of Transboundary Aquifers: Many Ways of Going Forward, but Only One Way of Standing Still’ 23 Review of European Community and International Environmental Law (2014), 32.

[5] Other instruments such as the 1997 United Nations Convention on the Law of the Non-navigational Uses of International Watercourses, the 1992 UNECE Convention on the Protection and Use of Transboundary Watercourses and International Lakes, and the 2002 UNECE Model Provisions on Transboundary Groundwaters address governance over some groundwater, but not aquifers specifically.

[13] Materials from the land’s surface such as oil, road salts and chemicals can move through the soil and polluted groundwater, which is then extremely difficult to decontaminate

[14] Andrew Ross, The Governance of Transboundary Aquifers: Towards a Multicountry Consultation Mechanism, The Case of the Stampriet Aquifer. Paper presented at the XV World Water Congress, Edinburgh, UK (25-29 May 2015).

[15] Geert-Jan Nijsten, Worldwide Assessment of Transboundary Aquifers with a Focus on the African Continent. Paper presented at the XV World Water Congress, Edinburgh, UK (25-29 May 2015). <http://www.un-igrac.org/publications/595&gt;.

[17] Convention on the Protection and Use of Transboundary Watercourses and International Lakes (adopted 17 March 1992; entered in force 6 October 1996) 31 ILM 1312

[20] Draft Articles, n. 2 above, Article 8(2): ‘Where knowledge about the nature and extent of a transboundary aquifer or aquifer system is inadequate, aquifer States concerned shall employ their best efforts to collect and generate more complete data and information relating to such aquifer or aquifer system, taking into account current practices and standards.’

LWRG researchers Mark Zeitoun, Naho Mirumachi, and Jeroen Warner have a new book on water conflict and transformation analysis. With input from water collaborators across the globe, they provide a valuable toolkit for critically re-thinking water conflicts. Learn more on our "Books" page!