There is no crueller tyranny than that which is perpetuated under the shield of law and in the name of justice.           − Charles de Montesquieu

HH8 Concept Paper released! Please read “Transboundary Water Interaction IV: The Role of International Law in Hydro-Hegemonic Arrangements” for some background on the Workshop’s main themes. Bring ideas and critiques of the analysis to HH8. 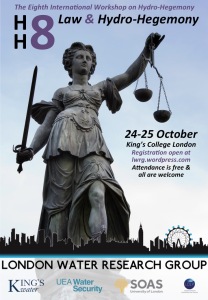 The London Water Research Group has been organising workshops around themes of water resources, distribution, power, and politics since 2005. These International Workshops on Hydro-Hegemony have been essential in advancing theories around the Framework of Hydro-Hegemony and considering the ways that power over water influences realities and experiences on the ground. HH8 seeks to further that tradition by addressing a gap identified through conversations at HH6: Transboundary Water Justice and HH7: Contesting Hegemony between theories of international law and hydro-hegemonic arrangements, particularly around the role of law in furthering and/or contesting those arrangements.

Water and law intersect around multiple issues. International water law, most notably the UN Watercourses Convention, influences the ways that countries interact with each other, particularly around the utilisation of transboundary water resources that in turn significantly impacts the distribution of water for human use. Other relevant bodies of international law include international environmental law, which in part governs pollution in shared water sources and other related ecological concerns; international trade law, which implicitly directs policy over the ‘movement’ of virtual water by regulating commercial transactions between countries; international human rights law, as individuals and communities make use of extant redress mechanisms and ‘rights’ discourses to call attention to water access and allocation at local levels; and international humanitarian law, which governs water arrangements in the midst of interstate armed conflict.

None of these sectors of international law or issues of water management and distribution are free from issues of power, justice, and hydro-hegemony. The Organisers assert that law can be used or misused to further specific interests. The modern international legal regime governing nation-states is intrinsically tied to power: In some ways, it is hegemonic, both being produced by and producing those with power; in others, law provides a unique opportunity to ‘level the playing field’ between actors with different capacities and levels of material power and may thus be a useful tool for counter-hegemonic action.

Practitioners, researchers, students, and activists are called to London 24-25 October 2015 to consider the relation between law and hegemony in a critical and creative atmosphere leaning on some core contentions:

HH8 will be formatted and led in the spirit of these assertions, running as an interactive, participant-led workshop of collaborative learning rather than a traditional academic conference. Participatory small and large group discussions, practical simulations, and teaching sessions will explore the following questions:

Check this page frequently for event updates and further details!

LWRG researchers Mark Zeitoun, Naho Mirumachi, and Jeroen Warner have a new book on water conflict and transformation analysis. With input from water collaborators across the globe, they provide a valuable toolkit for critically re-thinking water conflicts. Learn more on our "Books" page!